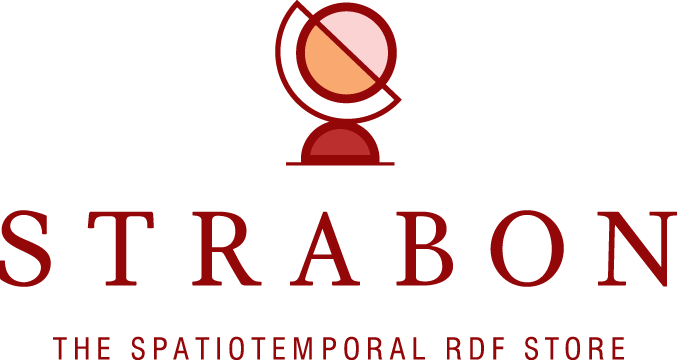 Strabon is a spatiotemporal RDF store. You can use it to store linked geospatial data that changes over time and pose queries using two popular extensions of SPARQL. Strabon supports spatial datatypes enabling the serialization of geometric objects in OGC standards WKT and GML. It also offers spatial and temporal selections, spatial and temporal joins, a rich set of spatial functions similar to those offered by geospatial relational database systems and support for multiple Coordinate Reference Systems. Strabon can be used to model temporal domains and concepts such as events, facts that change over time etc. through its support for valid time of triples, and a rich set of temporal functions. Strabon is built by extending the well-known RDF store Sesame (now called RDF4J) and extends RDF4J’s components to manage thematic, spatial and temporal data that is stored in the backend RDBMS.

The first query language supported by Strabon is stSPARQL. stSPARQL can be used to query data represented in an extension of RDF called stRDF. stRDF and stSPARQL have been designed for representing and querying geospatial data that changes over time, e.g., the growth of a city over the years due to new developments can be represented and queried using the valid time dimesion of stRDF and stSPARQL respectively. The expressive power of stSPARQL makes Strabon the only fully implemented RDF store with rich spatial and temporal functionalities available today.

Strabon has been shown experimentally to be the most efficient spatiotemporal RDF store available today. See the papers Geographica: A Benchmark for Geospatial RDF Stores, and Representing and Querying the valid time of triples for Linked Geospatial Data for more details of how Strabon outperforms all other geospatial or temporal RDF stores available today including commercial systems.

Strabon also supports the querying of static geospatial data expressed in RDF using a subset of the recent OGC standard GeoSPARQL which consists of the core, geometry extension and geometry topology extension. The implementation of the other components of GeoSPARQL is underway.

Strabon is released under the Mozilla Public License.


Get Started with Strabon and stSPARQL.

Our team will present a tutorial on "ReQuLGD: Representation and Querying for Linked Geospatial Data" at ISWC 2017 in Vienna on October 21st. Don't miss it! Until then, make sure that you check the tutorial page to stay tuned.

Our team will present our work on tools for storing, querying, publishing and visualizing linked geospatial data at FOSS4G-Europe. See you in Paris!

Check out another great MELODIES use-case in which Strabon is used to store and query timeseries data.

Check out a very interesting blog post about using Strabon and Silk to store, query and interlink soil moisture data in the context of the EU project MELODIES.

Our team, in collaboration with CWI gave a tutorial on Publishing and Interlinking Linked Geospatial Data at ESWC 2015.

Our team will present a paper on a Benchmark for Geospatial RDF Stores and a demo on Visualizing Time-Evolving Linked Geospatial Data at ISWC 2013.

Our team won the best demonstration award at ESWC 2013 for Sextant. Check out the demo.

Our team will present a paper on the temporal features of Strabon at ESWC 2013.

Our submission to the Semantic Web Challenge won the third place! Thanks! Check out the real-time fire monitoring operational service.

Our team presented a paper on Strabon, a paper on Querying Linked Geospatial Data with Incomplete Information, a demo paper, an invited demo and our submission to the Semantic Web Challenge at ISWC 2012.

Tutorial on Data Models and Query Languages for Linked Geospatial Data at RW 2012.